As many of you know, Congress can be more partisan than a bunch of Bloods and Crips fighting over a street corner. That said, just like in the crack game, there are rules that the Red Team and the Blue Team both share, and if someone breaks them, they get iced. President Donald Trump is testing one of the Game’s biggest rules right now with his Declaration of a National Emergency at the Southern Border, which he is using to cut out the corner boys on Capitol Hill and go straight to the money supplier — the taxpayers — to move un-authorized funds towards building a wall on the Mexican border. This is a massive cuck to Congress’s Constitutional power of the purse, and it has Members of Congress on both sides of the aisle knuckling-up to teach the President a lesson about what happens when he steps on their turf.

Most important among them is Senate Majority Leader Mitch McConnell (R-KY), who has been criticized more in the past two years than AIDS, Ebola, and Maroon 5’s Super Bowl halftime show combined due to the fact that he has used his control over the Senate Chamber to block all the bombs that Democrats have been lobbing at President Donald Trump.Â But with the President stepping on Congress’s authority, the GOP Godfather has been awakened and is refusing to sit this one out.

Sometime in the next two weeks, the Senate is going to consider the House-passed Joint Resolution of Disapproval– and there is this awesome market to bet on its outcome.

First, a little background that is informing the bets I’m making. Most of the Fake News Media thinks that Donald Trump’s use of a Presidential Proclamation to go around Congress’s border wall ban isÂ proof that he is an idiot who doesn’t care about the rule of law. I disagree and think that it is actually evidence of the opposite: that Trump has a deep understanding of what it means to be Commander-in-Chief, and is possibly a genius. That is because one of the longest traditions of the U.S. Presidency is to ignore the law and do whatever you want until Congress or the courts makes you stop. Andrew Jackson started this tradition by firing all the civil servants who worked for his rivals (a tradition that still lives on) and alpha dogs like Abraham Lincoln continued it by doing blatantly illegal things like freeing the slaves without Congressional approval (The Emancipation Proclamation). What a savage.

Modern presidents have also taken their law-breaking responsibility very seriously. George W. Bush got jacked-up on protecting the country from terrorists by invading people’s privacy and using some “enhanced interrogation techniques” on “enemy combatants” that the courts and Congress eventually shut-down. And Barack Obama put on an absolute clinic for how to use illegal environmental regulations to “save the planet,” whatever that means. Unfortunately for old BO, he couldn’t save his agenda from the Constitution either, and those regs got iced by the courts like a snitch on the streets.

What’s important to know is that: (1) Presidents absolutely love to to try to steal territory from Congress and the Judiciary; and (2) When they do, they often get smoked for it.

Which gets us back to the present, as Congress knuckles-up with a Joint Resolution of Disapproval that the Democratic-led House of Representatives passed last week with 13 Republicans supporting it. Now, the Senate is poised to take up the measure and it’s almost guaranteed to pass. Republican Senators Rand Paul (KY), Susan Collins (ME), Lisa Murkowski (AK), and Thom Tillis (NC) have already pledged to vote with the Democrats, which gives them the 51 votes they need to send this bill to Trump’s desk. Because of this, PredictIt traders have already raided most of the value in the lower echelons of this market:

But if you missed this gold rush, don’t waste your time crying. There is still a solid opportunity to profit off the long tail of this market, because the Senate’s vote is going to turn into a bipartisan beatdown. Just look at the numbers: only 5 percent of traders think that the current 51 Senate votes will be the winner. That is a full 1.5 percent lower than Marco Rubio’s total share of GOP delegates in the 2016 primary, so you know that Y51 is a massive loser. In fact, if you add it up, only 28 percent of traders think that 53 or fewer votes will be the final tally.

Why are the Republican Bloods joining up with the Democratic Crips? I will letÂ ride-or-die Sen. Mike Lee (R-UT) explain that one.Â In a statement, Lee spoke for Constitutional Conservatives when he said that, “Congress has been ceding far too much powerÂ to the executive branch for decades. We should use this moment as an opportunity to start taking that power back.”Â In other words: Joining him in publicly throwing shade on Trump’s plan were other hardcore Republicans, like Sen. Pat Toomey (R-PA) and Chuck Grassley (R-IA), which should be a huge red flag to everyone. If these loyal Republicans are reaching for their gats, how many others that we don’t know about are doing the same thing?Â The experts at Politico think it’s 17. The experts atÂ SSG are currently watching 19. They are:

That’s right, I think that Trump is about to be clobbered. But toÂ be safe, I’m only going to bet that 1/3 to 1/2 of the Senators I’m eyeing vote with the Democrats, which is 7-10 total. When I add that to the Democratic Party’s 47 Senators (or 46, depending on how Sen. Joe Manchin feels when he wakes up in the morning), I get a range of likely votes that is somewhere between 53 and and 57, with a long tail reaching up into the 60s if the dam breaks against the White House.

Let’s see how that prices in with how other traders view it.

Yep, PredictIt’s traders mostly agree with me, though I’m more bullish about this market’s long tail due to the PhD I hold in understanding how Congress thinks. I know that once it’s clear that a bill will pass or fail, lots of people jump on the bandwagon. So I wouldn’t even write-off a 60+ vote tally on this measure, though I’m not betting my own dough on it.

Another reason why I am betting so high in the vote count is because the price action everywhere has been so volatile. Because of that, I’ve been shopping for positions with price at the very front of my mind. I just haven’t had the willpower to resist betting on bold predictions like 6 cents for YES on 58 vote. What a steal. Similarly, I’m checking-in pretty regularly to pick up some good NO shares on anything 54 and lower. And since I posted this pic, I’ve also bought some YES 55 shares at 22 cents. I’m just being very careful not to let my positions at Y55 or higher outgrow my gains on N54 or lower.

So when all of this ends,Â I’m either going to look like a genius, or you’re going to unsubscribe from this blog for what a huge flop these predictions were. Talk about a tough business. Whether we’re talking about slinging dope, moving legislation, or keeping you animals locked-in to SSG, the stakes are the same. I guess Omar onÂ The Wire had it right. 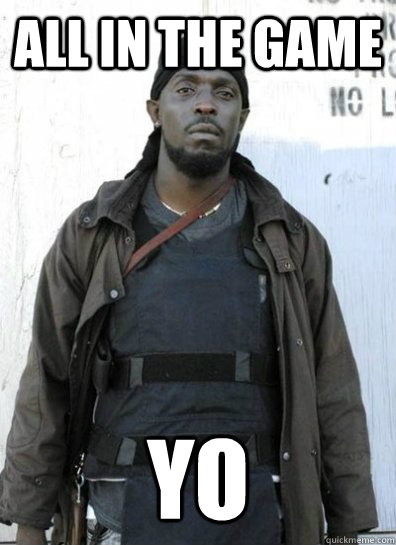