As promised, we are doing a deep dive on the child stars of the Democratic Party.

Today’s subject isÂ Andrew Yang, who is the first presidential candidate to run on two things: (1) Universal Basic Income (UBI); and (2) being famous for being famous.

Thanks to viral content on Twitter, Reddit, and 4chan, Yang has gone from a fringe candidate to a new face who some think is on a rocketship to the top of Democratic Party.Â I think this is a bunch of hooey though. The Kim Kardashian model for success — being famous for being famous — does not apply in politics. And fortunately for you, I am both a genius and a philanthropist, and am about to share the secret to getting rich off of Andrew Yang’s ill-advised run for president. I love Andrew Yang because he is more Hollywood than Brad Pitt, cocaine, and Scientology combined. That’s because the most LA thing in the world is to be famous for being famous.Â For example, it has been 15 seasons and there are still only about 17 people on earth who know whatÂ Keeping Up with the Kardashians is about, or what exactly Kim, Kendall, Kylie and Khloe did to become a big deal. But this is not a joke at all. Jennifer Lawrence can make a few million bucks making a superhero movie any old day, but Kylie Jenner literally became a billionaire overnight when she launched Kylie Cosmetics in 2018. This is her company that seeks to exploit her 129 million Instagram followers for profit. Anyway, once Kylie turned into the #1 moneybags in all of Hollywood, it basically proved that being famous for being famous pays way more than being famous for being good at your job. So it was only a matter of time before a politician like Andrew Yang came along to try the same in D.C., which everyone in the business knows is just, “Hollywood for ugly people.” If you are unfamiliar with this term, here is a picture of Ted Cruz with a beard: Back to the point. First of all, when I heard that there was some bigshot named “Andrew Yang,” I immediately assumed that he was a rich guy who made a killing in tech or finance. However, it turns out that sometimes stereotypes are wrong. That is because Andrew Yang is a poor. In fact, the only famous thing that has done is collect 65,000 signatures to become a presidential candidate by promising people a “Freedom Dividend” if he is elected. That is fancy talk for $1,000 per month of “Universal Basic Income,” which has made the Internet go absolutely insane because no presidential candidate has ever endorsed that idea. Except what these boneheads are missing is that Andrew Yang is only slightly more legitimate as a presidential candidate than your Uncle Todd who writes his own name in every time he votes because he wants to “throw the bums out.” Seriously, 65,000 signatures is a long way from Sen. Kamala Harris (D-CA) raising $400,000 in a day for then-Sen. Heidi Heitkamp (D-ND), or Sen. Bernie Sanders (D-VT) almost knocking Hillary Clinton out in 201, despite the fact that the entire election was rigged for her to win.

That said, one constituency that Yang absolutely dominates is the disaffected meme-making Reddit bros. They have been hyping his candidacy nonstop and because of them, there are more viral Andrew Yang memes on Twitter than Notorious B.I.G. murals in Brooklyn, which is saying a lot.

Let’s have a look at their work:

A summary of Andrew Yang’s base: 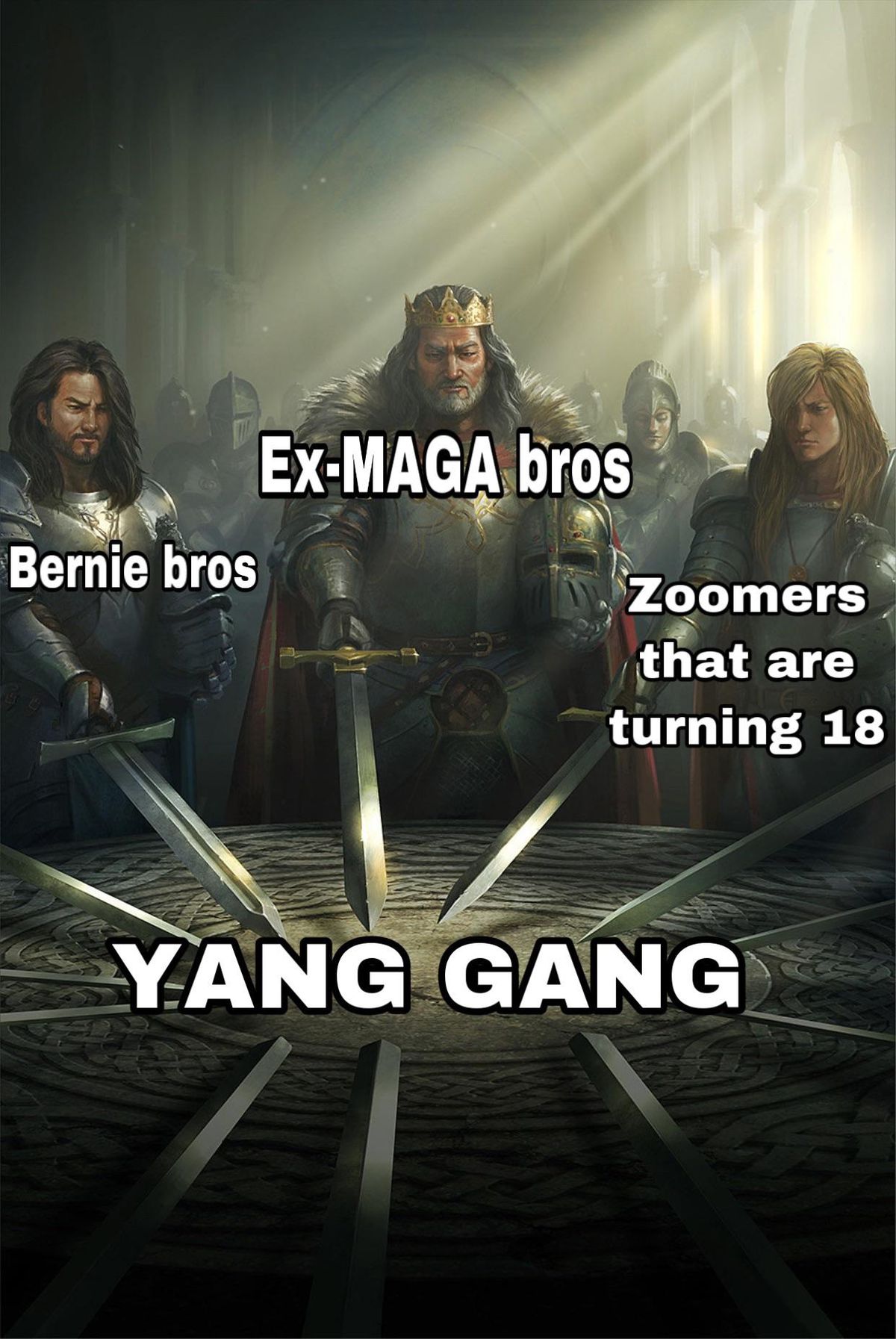 A visual imagining of the “Freedom Dividend”:

An evocative rendering of the challenges facing workers in the post-industrial economy, and what Andrew Yang offers them.

Presidential candidate @AndrewYangVFA is trying to save us from a robot dystopia. I think Arnold Schwarzenegger was meant to endorse this guy… or protect him.@Schwarzenegger #Terminator#Yang2020 pic.twitter.com/AzyVZgdnar

A campaign geo-targeting swing states voters in the Midwest:

A rendering of a potential crack-up Yang could cause in the MAGA crowd:

A visual conception of how Trump has failed the White Working Class and antagonized low-wage earners of all political leanings:

A basic summary of Andrew Yang’s plan to save humanity:

This hype machine earned Yang an interview on The Joe Rogan Experience, which is the #2 most downloaded podcast in America with around 15-20 million listeners, aka more than ten times the audience of MSNBC’s primetime lineup. Meanwhile, PredictIt traders are absolutely losing their minds over Yang’s candidacy, and are currently giving him a 13 percent chance of winning the Democratic nomination and a 10 percent chance of winning the Iowa Caucuses. That’s 43 precent better odds than traders are giving Sen. Kamala Harris (D-CA) to win Iowa and double the chances they’re giving Sen. Elizabeth Warren (D-MA). Don’t believe me? Look at these bad boys: How is this even possible? The Andrew Yang bubble might be the biggest I have ever seen in my life. It honestly rivals the size of theÂ post-Friday Night Lights Taylor Kitsch bubble, which gave us movie monstrosities like John Carter, Battleship,Â andÂ True Detective Season 2, and wound up costing studios hundreds of millions of dollars. The fact that traders are giving Yang comparable odds to Kamala Harris and Beto O’Rourke is so insane that it makes me wonder if most of PredictIt’s users are just farm animals with iPads. Let’s do the math here: O’Rourke and Harris are household namesÂ with experienced staff, fundraising ability, and platforms to spread their message. Andrew Yang is a random bro with a following on Reddit. There may be very little reliable polling data to prove my point, but I am going to be a alpha AF and make it anyway: the Unemployed Reddit Bro vote in Iowa and New Hampshire is pathetically small. I will bet you one million dollars that there are more Jai Lai players in those states than people who are actually susceptible to this type of madness. There is seriously a zero percent chance that any meaningful number of primary voters in rural states like Iowa and New Hampshire are tuned-in to the corners of the Internet that are pumping the Yang Gang.Â And a fringe campaign like Yang’s lives and dies by how it performs in these first primaries.

Wake up, animals. There is only thing to do with Andrew Yang futures, and that is to short them hard. I am gobbling up cheap NOs on all the markets his name shows up in. Honestly, at this point, there is nothing Andrew Yang could do that I wouldn’t bet against. Buying NO on him in the DNC primary markets is a buffet of cash that I intend to do more damage to than the bathroom at an all-you-can-eat Indian restaurant.

With all due respect to Kylie Jenner, being famous for being famous only works if you want to use your Instagram account to sell people cosmetics or self-help books. For the time being, it is not a path to the White House. Dream on, Yang Gang. I wish you better luck in 2024. In the meantime, I’m going to pay my credit card bill off with all the money I’m making shorting your bogus presidential campaign. 1 thought on “ALPHA ALERT: Andrew Yang is NOT Keeping Up with the Kardashians”