I am not a Buddhist but I one-hundred percent believe that Karma is real. The first reason why is that there is actual photographic evidence that Chuck Norris is a re-incarnation of Vincent Van Gogh, which is awesome and proves that God is real.

The second reason why is that there is this market,Â where you can bet on what place Beto O’Rourke will be in in the Democratic presidential nominee horse race at the end of April.

As far as I am concerned, this free money giveaway is the Universe repaying me for the massive losses that I and many of you suffered during the Great Shutdown Rules Cuck of 2018. If you are new to PredictIt or if your mind has erased this travesty from memory, let me fill you in. Last December, the U.S. government began its longest shutdown ever. However, PredictIt paid out winnings to the mongrels who bet that no shutdown would happen. I got mauled so badly in this market that for the first time in my life, I actually knew what it felt like to be Leonardo DiCaprio:

I guess we all have our bad days.Â But thanks to this Beto market, I now know that God is real, that he felt my suffering, and told PredictIt to create this free money market to make me whole again. Let’s look at today’s data to get clued-in:

First of all, this table, dated March 29, is newsworthy. Almost all the polls so far have had Beto in third place and ahead of Sen. Kamala Harris (D-CA) by a few inches. Harris overtaking Beto in the RCP index is a new development, but I am chalking it up to an outlier Harvard-Harris poll that has Beto with only 5 percent support among Democrats.

Let me explain: At this stage in the election cycle, it is bonkers to think that a politician could do anything that would cost him half his support in the span of a month. I.E., there is no explanation for why Beto’s numbers could plummet from about 9.5% on average to 5% in one week, as it did in this poll. If this trend were to continue long enough for Beto to fall into the Elizabeth Warren 5%-average range, I would be more shocked than I was when I found out that that people still pay money to watch baseball games. That is because there is nothing happening in politics right now that should motivate such a big change in Beto’s appeal. When this market closes on April 30, we will still be six weeks away from the first Democratic debate,Â nine months away from the first primary, and a year-and-a-half out from the election. Basically, the only major American political event happening in the next month is Donald Glover’s performance at Coachella.

Therefore, I am betting that nothing changes and that Beto finishes in either 3rd or 4th, which is where he is now, and which you can buy at around 72 cents per unit. The only way that this combo won’t pay out is if Beto either plummets in the polls or rockets up unexpectedly, and I don’t think that either scenario is likely. To fall on his face, O’Rourke would have to do something truly unthinkable, like fake his Native American ancestry or manufacture a false hate crime attack on him while visiting Chicago. And for Beto to gain bigly in the polls, someone above him would have to drop out. Someone like… Joe Biden. Oh, shit. Look for a piece on that later. But as those of you who are not ding-dongs already know, we have been freaked-out about whether Joe Biden is going to run for President for a while, and we have been huge beta cucks about making any bets related to him due to the fact that our proprietary Kamala Harris Bullshit Baseline model has identified Uncle Joe as a much riskier trade than the markets are pricing him at. So now that Joe Biden is officially a #MeToo target, I am begrudgingly buying some “2nd” place shares on Beto just in case the PC Cops disappear him the way they did Sen. Al Franken (D-MN) for this photo. 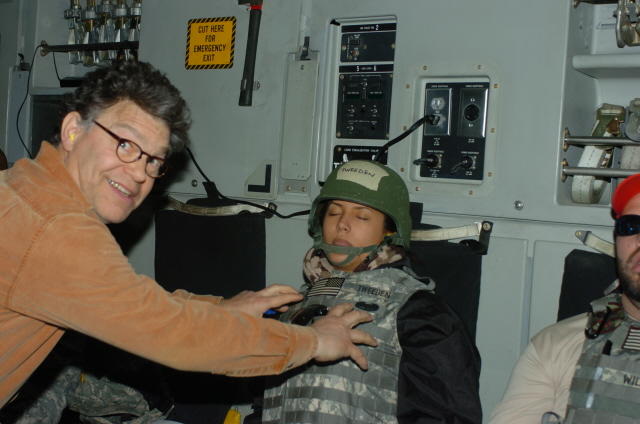 I will be dumping these shares in 7-10 days if no other damaging stories about Biden surface.

Lastly, I am picking up as many shares as I can in the “No, 5th or Lower” category because there is really just no way that Beto it is going to fall that far in a month, especially since he is officially launching his campaign this week and beginning a media blitz. So here’s what I am holding

There you have it. This is now officially aÂ “Will Joe Biden get pressured out of running for President before April 30th” market.