I am extremely happy to tell you that I am not dead. That is because I have been staring at the rules for this Senate filibuster marketplace for the last 12 hours, which is honestly almost as boring as being locked in a coffin.

I have been massively confused by this market and the main reason for why is that neither its rules nor the legislation underneath them have anything to do with “the legislative filibuster.” In fact, the Senate Republicans’ plan to alter cloture motions is only applicable to presidential appointments, which are totally different. This type of villainy can only be the work of one thing: Yep, better stay out of his way.

The good news for you is that I am addicted to gambling and running a blog that has more gold in it than Fort Knox, so I will show you the path to alpha.

First, some background. On Tuesday, Sen. Majority Leader Mitch McConnell (R-KY) dialed-up a resolution that would drop the amount of time that the Senate can spend debating entry-level presidential nominations from 30 hours to 2 hours. This is partially because Republican and Democratic Senators have used the nomination process to unfairly bone opposing White Houses over the course of the last two administrations; and it is partially because Mitch McConnell is a total savage who enjoys winning more than anything on earth. The downside of all this is that it has created a massive Catch-22 inside of the Senate Majority Leader’s office. That is because Mitch McConnell now has to deal with three very conflicting priorities: (1) winning; (2) preserving the Senate’s reputation as “the world’s greatest deliberative body” thanks to the generous powers that it gives the minority party to block anything at any time; and (3) avoiding birds of prey during his spawning season: 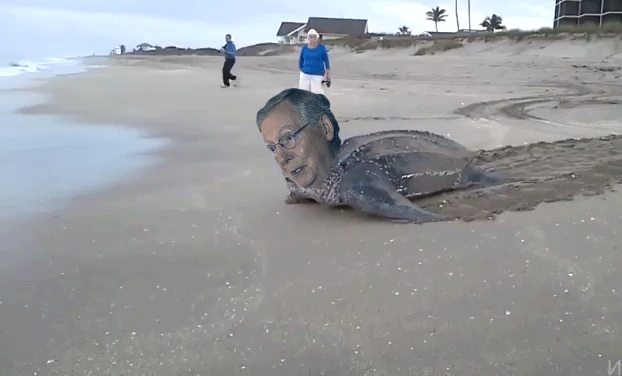 If you want to learn the whole history of the filibuster and/or the cloture motion to break it, please visit www.google.com.Â But if you want to make money on the question of whether or not Senate Republicans will change the rules underneath it, here is the truth according to Keendawg: for 10 years, Republicans and Democrats have filibustered presidential appointments without any goal other than boning the opposing party. Both parties have complained about “abuse” and “obstruction” and both parties have taken temporary actions to lower the number of votes needed to break filibusters of executive appointments. Democratic Majority Leader Harry Reid (D-NV) did it in 2013 and Mitch McConnell did it in 2017.

So the question of this market comes down to whether Mitch McConnell is bluffing and waiting for Democrats to make some filibuster concessions; or if he is going to use a parliamentary package that is more complicated than the pharmaceutical regimen I take before watching a Patrick Swayze movie to “go nuclear.” My hunch is that the Democrats actually agree with McConnell’s gripes and that their current campaign to obstruct Trump’s presidency is modeled on the Hall of Fame job Senate Republicans did obstructing Barack Obama’s. This means that the debate over filibusters is more like an argument between mom and dad over who is going to tell the kids that little Sparky had to get put to sleep than it is an argument over whether or not the nomination filibuster is a pet worth keeping alive. By now we should all know that Republicans and Democrats are shitty parents who non-stop feud for the love of their children (voters) at the expense of the family’s longterm happiness. That’s why Democrats want Republicans to put the nomination filibuster down for good — so that Sparky’s blood is on their hands alone and so that they can score points with voters for “doing the right thing.” This is a 100 percent savage move that an alpha dog like Mitch McConnell has to respect. Also, he basically confirmed my theory when he said:Â

“Democrats overwhelmingly supported changes like these [the appointments and filibusters] in 2013 when they helped President Obama. And privately, many of our Democratic colleagues tell us theyâ€™d be happy to support this new proposal, too â€” as long as we postpone its effective date until January 2021, when they hope there will be a Democrat occupying the White House.”

Other sources have confirmed the bipartisan interest in McConnell’s package.Â So I am betting that the Democrats let McConnell’s little stunt go through untouched. But the question of whether he moves a bill that satisfies this market is still unclear to me. So I say, pray for alpha — and that I never have to write another post about Senate procedure again.